Markets, street stands, and restaurants in Mexico City present travelers with countless options for delicious, iconic dishes of Mexican cuisine. For those that don’t speak Spanish, it can be a little overwhelming to know how to order and just what it is that you are ordering. To help you explore the culinary landscape of Mexico City we have put together what we think are some of the most useful Spanish words for navigating its gastronomic scene.

Here are a few words with examples of how to use them that will help you in your stay in Mexico. Mexicans are known to be welcoming to tourists and really appreciate it when people make the effort to learn some Spanish.

Por favor / Gracias: “Please” and “Thank you”. Mexicans are typically very polite mannered and so they really appreciate when you, too, use “por favor” and “gracias” when ordering food in Spanish.

Permiso: It translates to “excuse me”. You can use this word in a busy area when you want to move through a crowd. It’s a polite way of asking for permission to let you pass by.

Provecho: This word is the equivalent to “bon appétit”. It’s generally used at the beginning of a meal, but in Mexico, people also tend to use it when for example entering a restaurant or encountering people at a street stand that are already eating.

Yo quiero… – “I would like…” Use Yo quiero to let restaurant staff or vendors know what you would like to be served. 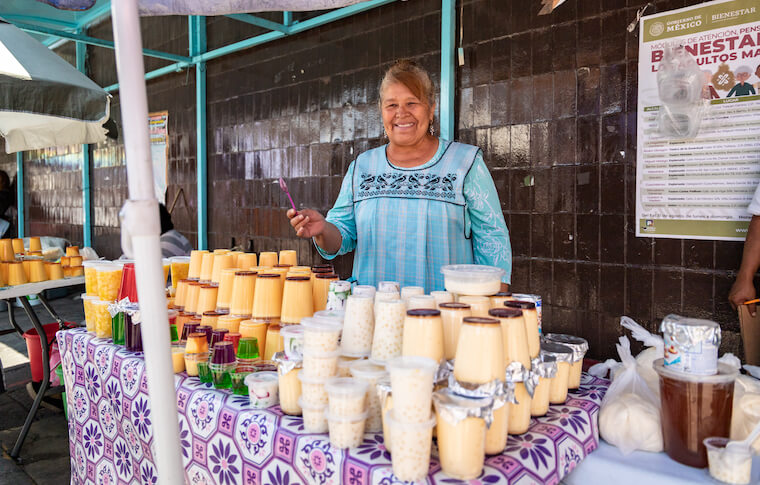 Basic Spanish Questions You will be Asked or may Ask

Vendors or restaurant staff will ask you:

¿Qué desea comer? – What would you like to eat?

¿Qué desea beber? – What would you like to drink?

Or you may ask:

¿Me podría dar una carta por favor? – Could I please have a menu?

Spanish Food Vocabulary to Help When Ordering Food in Spanish 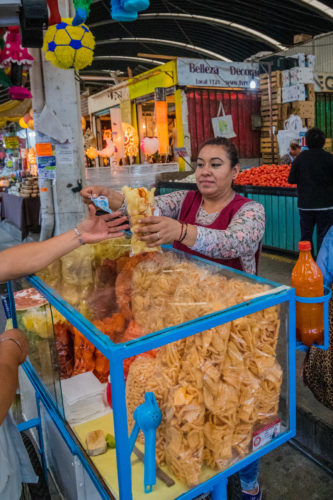 Picante: Means “spicy”. Sometimes English speakers get confused with the word “caliente” which means hot, referring to temperature. On occasion, both words can be used at the same time. For example, when having a soup and if you add some spicy salsa, then you could refer to it as being both “picante” and “caliente”. A good thing to keep in mind is that everyone has a unique tolerance to spicy food, so instead of asking if a salsa is picante, as people will generally respond according to their own taste, we recommend you first try a few drops and then decide if you want more.

¿Con todo?: This means “With everything?”. In the context of food, restaurant waiters or street vendors commonly will ask you this question to know if you want to add all the optional ingredients to your order. For example, if you order tacos, typically, the extra options include cilantro, onions, and salsa. If you are having a sandwich this question normally refers to adding pickled jalapeños and/or salsa. If you don’t want any of these options you can say:

Maciza / Surtida: This is referring to the selection of certain parts of the meat in particular types of tacos such as carnitas (pork) and barbacoa (lamb), which are made by cooking the entire animal. Customers can select maciza if they only want lean meat. Surtida is for the more adventurous eaters, it means “assorted”, and so it could include skin, fat and/or organs like liver or kidney combined with meat. The “surtida” option may not sound very appealing to everyone, but it’s something worth trying as it tends to be the most flavorful option and it also supports the Mexican philosophy of not wasting any part of the food being prepared.

Delicioso / Muy rico: Means “Delicious” and “Very tasty”. You can use either of these expressions to compliment the cook or waiter when you enjoy your food. 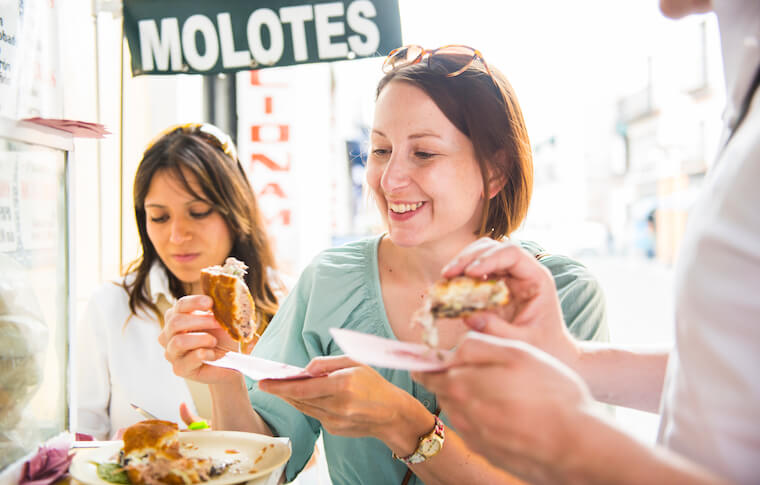 Cemita: A delicious round bun topped with sesame seeds, crunchy on the outside and doughy on the inside. Originally from Puebla, but now also found in Mexico City, its filling includes quesillo (string cheese), avocado, chiles and pápalo and your meat of choice (if you want it) which can be beef, chicken or pork milanesa, sausage or smoked turkey leg, to mention a few. Pápalo is a key ingredient for cemitas. It’s a round-shaped leaf, powerful in flavor, often referenced as a cross between cilantro and mint, that is added raw to the sandwich. The Cemita, you can find in both street stands and some restaurants throughout the city. 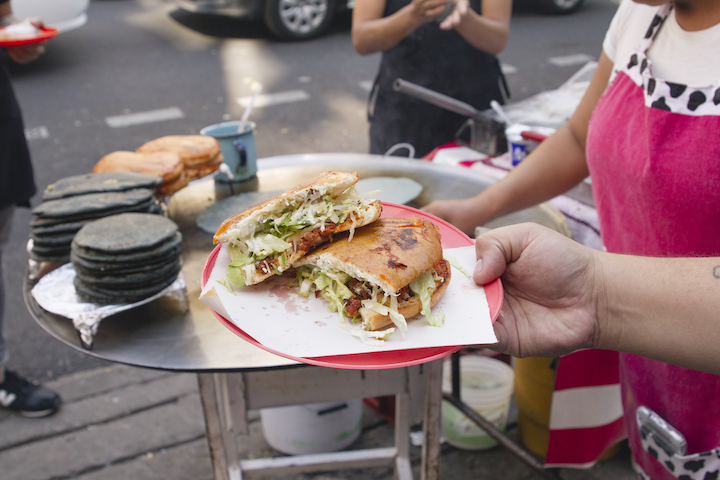 Pambazo: Is a sandwich prepared with a savory bun dipped in red salsa. It’s stuffed with a mix of potatoes and chorizo and topped with lettuce, cream, salsa, and freshly shredded cheese. The bun is then toasted on a griddle with oil to make it extra crunchy on the outside. Pambazo is a typical snack sold in street stands and markets, easy to recognize when vendors have it because you’ll see the buns drenched in red salsa on display. Pambazo is a perfect example of how Mexican culture tries to avoid wasting food. This sandwich originates from when people had leftover bread that was starting to get stale, and so they would dip the bread in salsa and toast it so it wouldn’t go to waste. This recipe became so popular that it eventually formed a part of the city’s Street Food culture, even though nowadays the bread used to make this sandwich is served fresh. 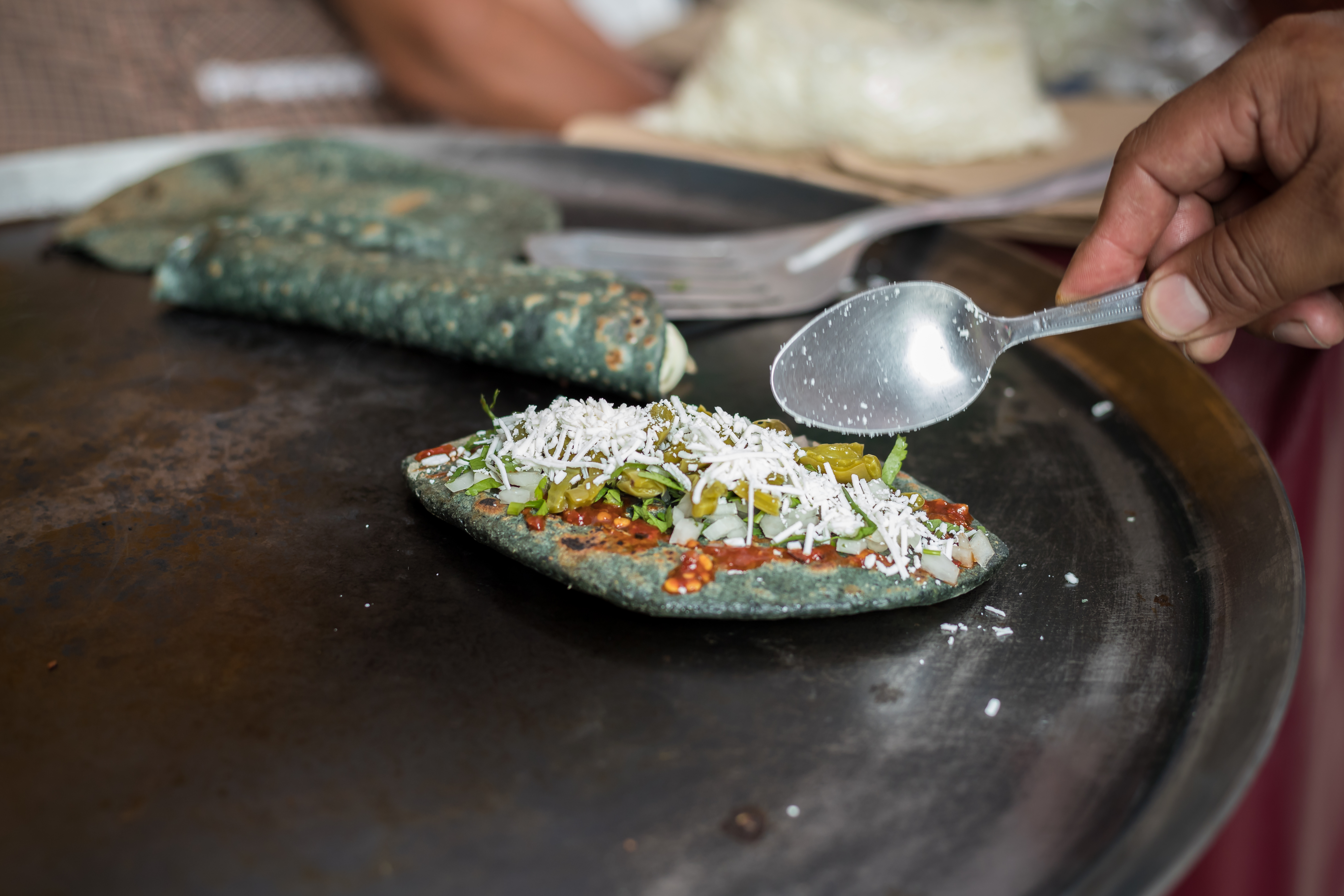 Tlacoyos: Are thick oval-shaped corn-based snacks. They can be stuffed with fresh cheese, refried beans or fava beans and is topped with onion, cilantro, fresh shredded cheese, and salsa. They’re found in street stands run by women, generally outside of markets or other busy areas such as subway station exits. They are usually sold in the same stands that sell quesadillas and gorditas, which all fall under the category of “antojitos” translated to “little cravings” which refers to snacks that can be eaten at breakfast time or lunch. It’s also possible to find them in markets, pre-cooked and packaged in small plastic bags for people to take home to heat up later. But the best tlacoyo is the one that is eaten freshly made on the spot. Tlacoyos are always hand-made, so it usually takes a while to prepare an order, but it is 100% worth the wait!

Chilaquiles: A typical breakfast dish made up of tortilla chips, slathered in warm green or red salsa, topped with freshly shredded cheese, raw onion and cream. Optional toppings are fried eggs, shredded chicken or beef. Chilaquiles can be found in both street stands and restaurants. Depending on the place, the salsa used can be either mildly or highly spicy. In some Mexico City street stands, you can get chilaquiles in a “torta”, served in a savory bun to eat “on-the-go”. Chilaquiles are very filling, which is why they are a good option for breakfast or after a heavy night out, although they can also be ordered at any time of the day in many restaurants across the city.

Esquites: Is a fresh corn kernel snack sold in street stands in the afternoon or around dinnertime. The corn is boiled in a basic chicken broth with epazote, an aromatic herb. When clients buy an esquite, they will be asked if they want the optional toppings: mayonnaise, salt, chili powder, and lime juice. When trying esquites for the first time, make sure to ask for all the toppings so you get the complete experience! For the adventurous, a few street stands around the city feature a special version of esquites that includes bone marrow or chicken feet.

Tamales: One of the oldest foods recorded in Mexican history. More than a dish, it’s a way of cooking. There is a huge variety of tamales all over the country, but the most common style consists of corn dough with some type of filling, wrapped in banana or corn leaves and steamed. There are sweet and savory versions, and these can be eaten for breakfast, lunch or dinner. Tamales can be found on street corners or in fine dining restaurants. Most tamales have lard whisked into the corn dough for added flavor and fluffy texture, but vegetarian options can be found in some restaurants. In Mexico City, some of the common flavors found in the streets are verde (tomatillo salsa and pork), mole (pork and mole), rajas (fresh cheese and poblano or jalapeño strips) and dulce (sweet with pink food dye and raisins).